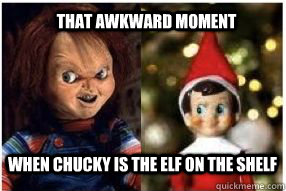 Am I the only one that thinks this whole Elf on the Shelf thing is creepy? As I understand it, the Shelf Elf is in your house to watch you. Then it flies around the house at night while you’re sleeping. But don’t touch it, because you’ll ruin the magic. Personally, I have no interest in having a doll that looks a little too much like a cleaned up version of Chucky from all those horror movies in my house watching me and waiting for me to go to sleep so he can move around and do whatever. I’m sorry, that’s creepy.

First of all, you’re supposed to name your elf. Okay, sure. Name him Chucky! Then put a heavy duty lock on the knife drawer and remove the fire arms from the residence. I’d even sleep with one eye open just to be sure he isn’t taking samples of your hair out of a brush and collecting your fingernail clippings so he can assume your spirit in a crazy elfin voodoo ritual.

It seems like everyone I know is posting pictures of their elf on Facebook. One family woke up to find the elf in a deep embrace with Barbie! What they didn’t mention on Facebook was that the elf’s name is Vladimir, and he was actually sucking plastic blood out of Barbie’s neck! Ken was just standing by helplessly, of course. He probably didn’t want to mess up his hair or soil his golf pants.

Supposedly the elf flies off each night to report to Santa on your every action and movement. Let’s get this straight: it’s not okay for the government to monitor your internet activity, but it’s perfectly acceptable to have complete in-home surveillance by a small, creepy doll. No secrets. No privacy. No hiding from the small, creepy doll because it also has access to every corner of your house.
What’s worse, everyone seems to be okay with the small, creepy doll watching their children. If I were a little kid, I’d have nightmares wondering what was going to keep Chucky the Elf on the Shelf from coming into my room to smother me in my sleep after reporting to Santa that I copied answers for my math homework out of the back of the book.

I get it that this is intended to be cute. Rudolph is cute. Frosty is cute. This Shelf Elf, I’m sorry, is just creepy.

Tagged as Christmas, Chucky, Creepy, Elf, Elf on the Shelf

Push the seven deadly sins aside! Forget about unspeakable crimes against mankind! Iran, Iraq and North Korea are no longer the Axis of Evil! The true source of evil among us has officially been declared … women drivers. According to the grand mufti of Saudi Arabia, Sheikh Abdul Aziz bin Abdullah al-Sheikh, the matter of women driving cars must be “considered from the perspective of protecting society from evil.” HA! I knew it!

It’s not just annoying to have some woman in front of you at the intersection putting on mascara long after the light has turned green, it’s a portal for pestilence. Giggly girls gabbing on the cell phone instead of paying attention to traffic is eroding the moral fiber of humanity. And don’t even get me started on the eternal damnation we are all being condemned to because women don’t know how to change the oil, check the tire pressure or use a turn signal! All of which is easily avoided by simply prohibiting women from driving. Can I get a kumbaya and an amen from the balcony?

You may recall that our friend, Mr. Abdullah al-Sheikh is the same guy who pointed out that driving would damage women’s ovaries as an argument about allowing them to drive earlier this year. I’m barely coping with the shock and dismay of the reproductive ramifications I’ve inflicted upon myself from years of Toyota time and now I have to accept that my car keys have unlocked uncounted evil into the world. It’s almost too much to bear.

I’m not completely sure that the most senior cleric’s words are getting past the veils of the Saudi women and soaking into their heads, because the push for the right to put the pedal to the metal continues. It obviously wasn’t enough for them this past spring that they were finally given the right to ride a bicycle in public. As long as it was only for entertainment. In a park. If they’re accompanied by a male relative. And dressed in the full abaya and veil. Okay, a burkha on a bike is going to be entertainment no matter which way you look at it, but a burkha in a BMW is a whole new kettle of fish.

If the protests continue and the issue is pressed, I can only expect the Sheikh to tack on another terror. Global warming, the failure of ObamaCare, Honey BooBoo … yup, all because somewhere there are women driving!

Filed under From the Sandbox