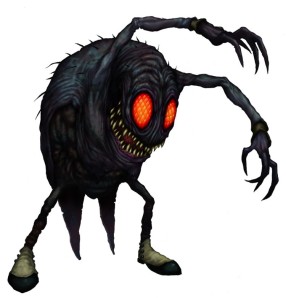 I was sitting around somewhere recently where I had to wait. Probably a doctor’s office or the oil change place or something. This is usually the only chance I have to actually pick up a magazine and thumb through it. At this particular hurry-up-and-wait location, I picked up a back issue of Texas Monthly to read the article on fire ants. Oh, that was a mistake.

It seems that those wacky researchers at Texas A&M have discovered that there is this certain type of fly that will lay eggs in the neck of fire ants. The larvae then start to feed on the fluids of the fire ant’s body until it gets to the brain. As it devours the ant brain – and what a gourmet meal that has to be – the ant slowly becomes a zombie. The ant zombie then mindlessly wanders away from the mound forgetting that it has important work to do, like organizing commando raids on innocent gardeners.

Eventually, far from the mound it use to call home and completely devoid of brain function and bodily fluids, the ant’s head finally just falls off and the new fly emerges.

First of all, this whole thing has a gross-out rating of 38 on a scale from one to 10. I hate fire ants as much as the next guy, but fly larvae who live in ant necks and eat their brains is disgusting. Don’t get me wrong, just because it’s disgusting doesn’t mean I’m not all for it. I just think that there’s a B-horror movie script in this: “Attack of the Zombie Ants” or “Lord of the Brain-Eating Flies.” Feel free to pause here and come up with a few of your own.

Secondly, what super nerd A&M scientist happened to be tagging along behind some pregnant fly to discover she was planting larvae in ant necks? Or did he work backwards? “Hey, where did all these headless zombie ants come from?” Either way, there’s a guy out there who probably needs a make-over on several levels.

What is completely alarming, though, is that more and more I find myself wandering into a room and wondering why I’m there, sometimes feeling dehydrated … Could someone please come check my neck?!?!

(Originally published in The Source Weekly May 6, 2010)