When Did This Happen?!

It’s all fun and games until you show up dead. Trust me, I know. You can only imagine my understandable surprise and concern to discover that, sadly, Jean Ciampi passed away January 9, 2015. If you think it’s funny, go Google search yourself and see if you missed your own funeral by two and a half years. If someone had actually notified me of my untimely demise, I would have possibly attended the event, signed the guest book, and tried to piece together what exactly happened that I turned up dead in Ventnor, New Jersey.

What was yet even more alarming was to then discover that since the time of my unfortunate passing, I’ve still been voting a consistent Republican ticket in Florida. I’ve always said, “Vote early and vote often,” so I’ll stand by that. But for the sake of clarity, I vote issues not party lines – even from the grave.

Of course, this then led me to check Facebook to find out what else I didn’t know about myself. For a split second, I thought I’d become a Spanish-speaking male gymnast managing a Tommy Hilfiger in Venezuela – and not at all bad looking, if I can say that. Obviously, at least in that case, wires have just gotten crossed somewhere causing confusion. Anyone who knows me knows I’ve never spoken Spanish beyond ordering a beer and finding a bathroom.

So back to the George H. Wimberg Funeral Home in Linwood, New Jersey (I’m guessing that’s somewhere near Ventnor. If you’re from New Jersey, feel free to jump in here.) I’m scanning through my obituary and seeing a couple of things that need correction. For example, they got my age wrong. I’m not, despite all appearances, 87-years old. They also got all the names of my family members wrong. But I guess they did go astray on that one critical detail that I’m not actually dead, so I shouldn’t be surprised that they missed the mark on those things, too.

Regardless of all that, from the condolences left online at the funeral home’s website, I see how much people really do appreciate my cooking and baking. I hate that it’s taken this for me to find out, but still good to know. And the indications are that I’m a pretty okay person. Or at least I was. May I rest in peace. 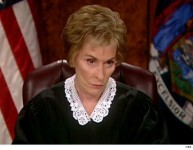 I don’t know why so many people waste their time judging others based on stupid, superficial things like the melanin levels of their skin, their stand on a power greater than themselves or how they cast their ballot. I could care less how well you wear the color orange, what you do on Sunday morning or if you wrote in Mickey Mouse to be governor of Idaho. However, I believe there are real points that separate us all into one category or another.

A friend of mine recently stated that he judged people by how well they navigated the self-check lanes. Yup. That’s valid. We’ve only had about 20 years of watching the demonstration. Where do you go that there hasn’t been a cashier scanning your stuff? It’s not that difficult to replicate the process on your own, especially with the disembodied voice telling you to “place the item in the bagging area.” But, if you can’t get it, and I’m trying hard to accept and love you even with your short-comings, please use the cashiers but try to pay attention next time.

Straight up, I’ll judge you based on your opinion about the designated hitter. There’s something fundamentally wrong with anyone who thinks the pitcher should have a free pass with the bat in a game where the point is to hit the ball to get on base. That’s why it’s called baseball and not Pitcher’s Mound Ball. It just makes zero sense. You’d never have a rule in football that you couldn’t tackle the quarterback. If the pitcher was that precious, there wouldn’t be a whole bullpen full of replacements! Be forewarned that when I’m the Commissioner of Major League Baseball, that mess is going to get cleaned up. American League pitchers might want to start taking batting practice now.

Of course, there are good people and then there are cilantro eaters. You’re one or the other. And honestly, the other stuff I can probably get past.

(Thank you, Judge Judy, for being the spokesmodel for this blog post.) 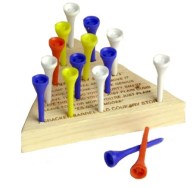 I had never eaten at a Cracker Barrel restaurant until this past week. But, too, I’m also the person who never watched an episode of “Dallas” – probably for the same reasons. It took less than 34 seconds to realize exactly why I would probably never go back to Cracker Barrel again any time soon: I don’t ever want to be that old. When you suddenly find yourself eating at Cracker Barrel just know you are on a slippery slope to the Luby’s buffet and a full-care nursing home.

Straight up, Cracker Barrel is basically a senior citizen theme park. Those rocking chairs on the porch are just age-appropriate thrill rides. Think rollercoasters for people over 65. Stopping at Cracker Barrel for dinner is not unlike going on a fall foliage bus tour without having to get up the steps of the bus or obtain a doctor’s release from the six medical specialists who currently file on your insurance. At the end of the day, you still get to eat with a huge group of other old folks then exit through the gift shop.

Oh yes, the gift shop. Where else can you get unlimited refills on your ice tea, purchase a cotton/poly blend quilt for $79.99, and pick up a complete collection of Tony Bennett’s greatest hits on CD? Not since the old Stuckey’s sold those weird pecan roll things has there been such a flurry of excitement in the retail world.

Don’t get me wrong, I’m not saying that the food wasn’t good at Cracker Barrel. In their defense, there was no blue Jell-O on the menu. You still have to wait to progress into your Luby’s stage of decline to get that. I will warn you, though, that this is not the place to go if having your food touch each other is going to trigger you. I spent most of my meal digging the green beans out from under the mashed potatoes. This wasn’t a problem for me, but I know this can cause PTSD in others.

The greater concern for me was if I was given an automatic membership into AARP with my meal. I’m not sure I’m quite ready for that (regardless of my eligibility). Nor am I willing to purchase shoes with Velcro closures. Sorry, Cracker Barrel, but give me another 20 years and I’ll be back. 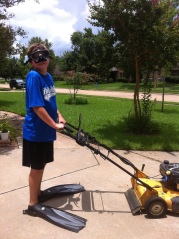 As I have just recently graduated my last child out of public schools with no interaction with CPS, the court system, or Federal Law Enforcement Officials, I feel I have credibility to pass along advice to parents coming along behind me. While I believe that half the fun of parenting is discovering new and better ways to screw up your kids and ruin their lives, these are tips to keep them from screwing up yours.

Big Parenting Mistake #1: Teaching your children to mow the yard. Do this and you’re setting yourself up for disaster. After a couple of summers, you’ll be fat and lazy, sitting on the porch with an ice cold watching them work like rented mules. Next thing you know, they’ll graduate from high school and go to college, leaving your much older, fatter, lazier self alone to push the mower. Don’t think you’ll pay the neighbor kids to mow because you’re paying college tuition, so you can’t afford those things.

Do not let your children learn to drive. Driver’s training is Big Parenting Mistake #2. Sure, those first few times they run to the store for you on their own is great, but then they start realizing they have freedom. This is a dangerous thing in a child. Suddenly, it will occur to them that they can drive other places besides the store, like out of state. Then one day they get in the car, drive away and don’t come home to mow the yard. That’s going to hit you especially hard if you’ve already screwed up and made Mistake #1. Plus, they took your car.

Have you allowed your children to start becoming free-thinking, independent people? Wow. You’ve just made Big Parenting Mistake #3. This almost completely guarantees that your children are going to screw up your life. Count on them wanting to think for themselves, be independent and not stay home to mow your yard. Probably with your car.

Children with no skills, ambition or transportation are more likely to stick around and take care of you in your old age. They’ll gladly heat frozen pizzas, apply bunion cream and pluck the hairs out of your withered, old chin until you die. And with the money you save not paying college tuition or financing a new car, you can pay someone to mow your yard.

The Truth About Running 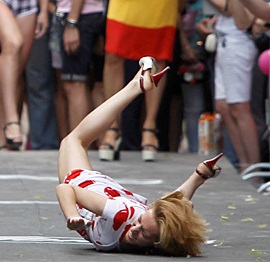 I use to run — and not just because I was being chased. I actually would run for, I don’t know, I can’t remember why I would do that, but I did. Now, for some reason yet unknown by me, I’ve decided to start running again in earnest. I’ve probably managed to kill off the last brain cell in charge of logical decision-making and running is the obvious fallout. Here are a few things, though, that I’ve discovered in my recent return to recreational running.

First of all, anyone who tries to sell you the line of garbage about endorphins and improved physical health blah bluh bluhh is probably addicted to catnip and concealing a criminal record. The truth is that running, if done right, will improve your cardiovascular system if, and only if, you don’t die first. As I was slogging along on my last run (which had the appearance of a forced death march), I kept wondering if I’d stay conscious long enough to tell the paramedics that my heart was in much better shape from running before he administered oxygen and the shock paddles.

Then there’s the whole fake news stuff about how you’ll look better because of running. After a run of any distance, I look like I’ve been picked out of the moving fan blades of a jet engine. I smell bad. I look bad. And I have an attitude that doesn’t even register anymore on the bad spectrum. There are encounters with rabid dingoes that are more pleasant than being around me after a run. So unless you really like the wild-eyed, red faced, oxygen-starved look, then no, I don’t look better because of running.

Sure, you’ll sleep better (if your calves don’t cramp in the night and cause you to scream obscenities). You’ll meet great people (like the formerly incarcerated catnip dealers). You’ll feel better (when you stop hurting, the toenails grow back and the blisters heal). And think of all the cool fun runs you can join (that cost as much to register for as a case of decent wine, so what really is the better choice?)

So, until this flight of fantastical thinking passes, I’ll be out there setting personal records that can be measured on the same scale as glacier movement. Feel free to tie on your shoes and join me!

(Note: That’s not me in the photo. Although it could be on most days.)