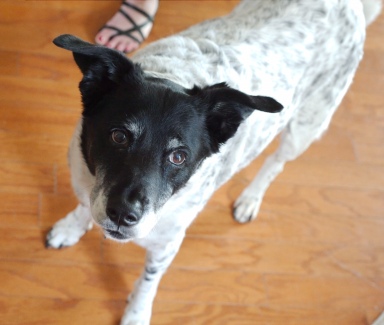 “Whoever said that diamonds are a girl’s best friend, didn’t have a dog.” I’m terribly sad to say that, after over 14 years, my best friend has gone to roll in greener grass. Buster, the rare African Spotted Yard Wolf, who has, on occasion, been the guest writer here, trotted across the Rainbow Bridge this week. (Don’t bother Googling African Spotted Yard Wolves. He was so rare, he was the only one. Actually, he was some kind of polka dotted mixed breed, but we never wanted to hurt his self-esteem by calling him a mutt.)

Buster joined our family the summer before my youngest son started Kindergarten, the same son who left just a few weeks ago to start college. Back then, I had boldly taken old towels and rugs to donate to the Brazoria County SPCA. But instead of coming back home with a nice tax receipt, I came back with the same old towels and rugs plus a puppy. You seriously have to wonder if they don’t teach those SPCA volunteers some kind of subliminal mind control techniques that convince you that you need a pet, a spay/neuter package, and a bag of Puppy Chow. More likely, I’m just a sucker for a fuzzy face and a waggley tail.

He taught my young sons important lessons about care-giving, unconditional love, responsibility, respect, and the importance of picking up dog poop before you push the mower. Lessons they will carry with them always.

Buster led a full life, more so after he recovered from his squirrel mania. For a period, he was so neurotic over the squirrels in our yard, we couldn’t even say the word. Unfortunately, the dyslexic son couldn’t spell it, so they just became S-Q-U-earls. He traveled internationally, lived in Saudi Arabia, and regularly got more fan mail for his posts than I have in the entire 8 years I’ve written it. To be honest, I think if we had a funeral service for him, he’d have more people show up than would turn out for mine. He will be sorely missed.

Will Rogers said, “If there are no dogs in Heaven, then when I die I want to go where they went.”  My goal now is to try to be the person Buster always thought I was, so that maybe they’ll let me in there, too.