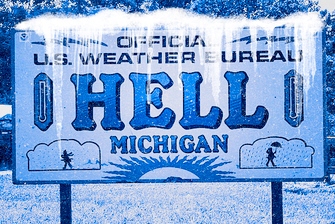 Heed my words: Do not pray for patience as God will provide the opportunities for you to learn it. Never ask, “What else can possibly go wrong?” Trust me, nothing tempts the Universe to yell, “Hold my beer!” more than that. And never ever, don’t ever say never. I actually said once I’d never live in the Middle East which landed me in Saudi Arabia for three years. As Harvey threatened Texas, I said, “My house will never flood.” It flooded. And then I said, “I’m never moving again.” Fill out the change of address card because I’m moving. TO MICHIGAN!

Michigan, where cold fronts are six foot deep! You don’t understand, people; my blood is so thin, it’s invisible! I fully expect by the end of my first winter to be found encased in ice like a Yeti on the backside of Everest, a look of miserable shock forever captured on my face. Ice belongs in tea or cream, not spread in deadly sheets across the road with the sole purpose of sending your car careening into a ditch so no one finds you until the “spring thaw” in July.

We’ve already bought a house there from a very nice couple who are gleefully laughing with giddy joy as they hippy-hop off to retirement in Florida. I think I may hate them. Despite that, they were so very kind as to agree to leave the outdoor patio heater and the snow blower for us. Snow blower? Are there YouTube videos for how to operate that? I mean, do you run out as soon as it starts snowing and blow the offending fluffy ice masses back into the sky? Do they have plow attachments for the mower? And in the name of all things holy, how do I get a pizza delivered in January?!

I’m trying hard to see the positives. I’ll have seasons and Hurricane won’t be one of them. I can look forward to summer – all 26 days of it. White Christmas will be more than just a song. I suppose, too, if I can survive three plus years in Saudi Arabia, I can probably survive Siberia. Wish me luck. Imma gunna need it!

Filed under From the Snow Drift

You Can’t Call It That!

Burger King offends me. Standing in allegiance with vegans and vegetarians everywhere, I must demand that they change their name. Burger, naturally, is an affront to the sensibilities of all animal lovers everywhere. Not to mention, the idea of having a crowned ruler dictating over a bun-oriented sandwich of any type seems highly archaic. To show greater tolerance and understanding, Burger King must forthwith be called Plant Based Protein Socialist Leader.

Dairy Queen also offends me. On behalf of everyone who may be lactose intolerant and unable to speak up for themselves due to irritable bowel, stomach pain and gas, I will be their voice. Again there’s the obvious issue with the crowned head of state thing, which is, of course, offensive, except to a very small portion of the LGBQT population. We’ll give partial credit for that. Otherwise, the name Dairy Queen must be updated to a more sensitive Soy Replacement Benevolent Monarch.

Freebirds World Burritos are okay. They seem to be inclusive of all avian species across the planet and have designated them as free. FreeRangeBirds World Burritos would be even better. No one wants a burrito raised in a cage, so that’d be taking the responsible extra step to ensure that there’s no possibility of anyone being offended.

Chick-fil-A, however, is a problem. While I understand it holds a high level of popularity, it has come under fire for the Conservative views of their ownership. I believe that changing the name to Empowered-Woman-fil-A would go a long way to correcting a lot of the offenses, both real and imaginary. You wouldn’t name a restaurant Babe-fil-A or Broad-fil-A. Chick-fil-A just is no longer politically correct and offends all women and those who want to be women or think their women or know women even casually.

In a world where we are all so deeply offended by every single last living thing, I think it’s time that the dining industry do their time in the hot seat. They must stop with the oppression and put the happy back in every single meal for every single person as dictated by that person’s believes and opinions no matter how individual or oddball.

So, if you don’t mind, I’d like a #2 Meal with a Diet Coke and a side of total tolerance and acceptance. Oh, and hold the onions. Onion breath is offensive.

Parents, when you jokingly told your kids to go play in traffic because summer is wearing thin and so are your nerves, did you not realize they thought you meant it? While in Houston this past weekend, I was stopped at two different, very busy intersections in two different parts of town and encountered children begging among the cars. These kids, who ranged from maybe 7-years old to mid-teens, were going car to car with football helmets asking for money. No responsible adults were anywhere to be seen. I’m guessing there are no responsible adults anywhere to be seen in their lives period. What the heck, people?!

And so my rant begins. First of all, there is not one single microscopic fiber of my being that has birthed children that will let me encourage, support or condone this. One of these boys was barely tall enough to see in the window of the cars which made it pretty difficult to see him, especially when he started darting through the cars to get to the median when the light changed. How difficult would it be to stuff one of them into a car as traffic started moving and that child never be seen again? Seems like prime pickings for human trafficking to me, but I suppose I’m just an over-protective fatalist, right?

All that aside, not for one minute did I believe these kids were collecting money for a youth football team, maybe because I want to live in a world where there is no such youth sports league that would send children into heavy traffic to raise money. Bottom line, the kids were just begging. Stop me if this is an insane idea, but, since they’re obviously not actually playing football, maybe they could spend some of their time earning money working at a job. Crazy, huh?

If a little kid rang my doorbell and wanted to use my bucket, my soap, my water and my hose to wash my car, I’d pay him $10 to do it. I’d go $20 if he was big enough to wax it, too. If a kid rang my doorbell and said he’d do whatever job I’d give him to earn a little money, I’d invent work for him. But whoever taught these kids to go beg in traffic or even permitted it should be flogged. Rant over.