Mauled by a Bear … sorta 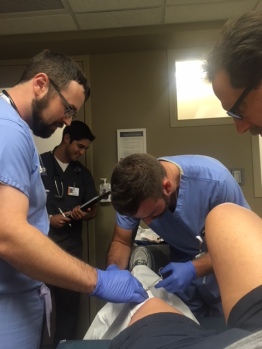 I just got back from the Emergency Room. Lots of blood, pain, and 8 stitches in my left shin from being mauled by a bear. … No, really, a bear! … Okay, a small bear. Think Paddington kind of bear. It was, after all, only 8 stitches. … No? … Fine, the real truth is that I got mauled by the corner of the dishwasher door. The stitches are real, but the bear maybe not as much. But any good journalist will tell you, though, to never let the truth come between you and a good story. So I’m sticking with the bear.

Let’s face it, we’ve all done it. If you’ve spent any time at all in a kitchen and have experienced the posh luxury of not eating on paper plates, then you’ve probably caught your leg on the open dishwasher door at some point. And it hurts. I, however, can’t just bump my shin, mutter some form of the word poop through gritted teeth, and then move on with my life. No, I have to go full combat mode. And lose.

When the ER doc looks at your leg and says, “The dishwasher did this to you? Through your jeans? Wow. I mean, I can see your tendon” then you know you’ve pretty much done a number on your shin. At the same time you start feeling a little stupid for being so badly roughed up by a kitchen appliance. That’s why you need a bear.

I think the only thing that impressed the ER doctor more than what brought me there was how I reacted to getting it fixed. When he shot me several times in a part of my leg that is nothing but nerve endings and bear drool, I commenced with a vocabulary that would get me inducted into the Marine Corps. The guy in the next room may have needed to add heart attack to his triage notes. And the kid in the waiting room who thought he broke his arm, thought again. Pain killers should not hurt that bad.

So if anyone asks what happened, I was mauled by a bear. A Whirlpool Gold Series Bear. With delay start option. And moving forward, my trust issues include the microwave and the refrigerator. And I’m totally good with paper plates.

I’m a firm believer that everyone should travel. You learn a lot about other places and people, and then you really appreciate what you’ve got when you get back home. Go ahead and hop in the car for a road trip past the state line (which, if you live in Texas, will take you a couple of days to reach – yeehaw Texas)! Personally, I just spent a bit of time outside of this great State and was amazed at how odd some of our nearby neighbors can be. Let’s take a look at Colorado, for example.

First of all, Open Carry has a completely different meaning there. In Texas, we’re all packing. But we’re packing a weapon that, until recently, was concealed and now is proudly slung on the hip John Wayne style. In Colorado, they’re packing spray. Bear spray. Because in Colorado, you’re going to get eaten by bears not gators and probably trampled by moose instead of bulls. And just so you know, bear spray is not applied the same way that mosquito spray is. To a bear, covering yourself in a fine film of bear spray is not unlike putting butter on popcorn. In the same way you’re not going to spritz each little individual skeeter that threatens to drain a pint. Things there are just a bit weird.

Did I say weird? Let’s just huddle up and sing a round of “Kumbayah” while we talk about some of the local folks. These are people that have graduated with honors from the Willie Nelson Master Gardener Program. It seems every corner is crowded with a liquor store, snack shop, and a dispensary. A dispensary is where you can go for your “organic healing” and to meet with your “alternative medical practitioner.” All of which is very likely driving business to the liquor store and the snack shop, if I have to guess.

Like wow man, that is totally so cosmic and psychedelic fur shur, but, well, not for me. I think I’ll stick with my Cigna-approved providers, skip the energy healing, pass a drug test with flying colors and just head on back home to Texas where taking a trip means you’re heading to Austin for the weekend. Dorothy had it right when she told the Wizard of Oz that “there’s no place like home.” Texas may not be heaven, but it’s got Whataburger and, for me, that’s close enough for now.